The day was very interesting yet educative at the same time. First of all it pushed me to have new relations with different people, which added to my knowledge in many fields including science and electronics. Each game made me face different challenges that left me with useful information at the end of the day.

After attending this event and trying most of the games I identified the main characteristics that I want to include in my game that forced people to gather in order to play it. When I went to the library to play the different games nobody of my classmates were there at the same time, which pushed me to meet new people and play with them. It also required a corporation between the different members of the group, which I saw as crucial when designing a game because people exchange information while trying to win the game and it benefits everyone. The day’s experience also made me realise the different aspects that I want to avoid when creating my game.

I played many different games with diverse purposes. The first game that I played was named “HOGA”. Each player had 4 cards that had the pictures of different aspects of virus C. Few of the cards had the different things that could cause the virus while others were used to defend the virus. This game is a card game that revolves around health and in particular virus C, which affects many of the Egyptian population. A group of cards represent the tools that lead to a contamination; others present the characteristic of the virus. I thought that it was a good way to spread awareness easily and inform different ages about the virus efficiently. The creator of this game informed me when I interviewed him that he had to do a lot of research around virus C in order to create this game. The amount of information that he gained from this experience impressed me. The fact that he is innovating in this game and computerising it showed me the changes that he had to do in order to adapt to the user. 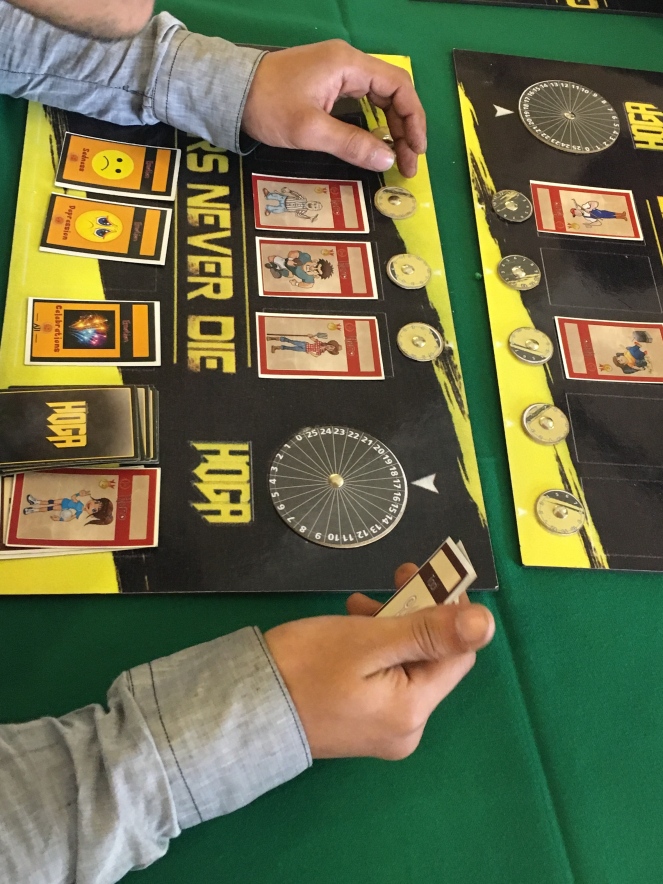 The second game was “Escape Room”. I liked it a lot because I had to meet other people and play with them due to the fact that this game required a group work. The game was revolving around a chemical combination that we had to build with magnets in order to end the spread of a virus. In order to have a model of this chemical combination we had to find three pieces of paper that were spread all over the room, which was a bit challenging and hard at first. Even though we didn’t win, I learnt that I don’t have to go far to search for the answer because it could be simple and easy to find.

The third game was named “virtual reality”. I had to put on glasses that let me be a part of the movie. The movie was a sort of roller coaster playing in a computer behind me. The purpose of this game was to make the player feel as if he was a part of the movie. This is actually what happened to me as I put on the glasses. I felt like I was disconnected from the world and only had to focus on this game. I liked this feeling despite the fact that I didn’t recognize its educational purpose and the quality of the movie needs to be improved.

The fourth game was all about recycling used materiel such as plastic bottles, paper cups and chocolate boxes in order to build something else. I really like the idea of this game and it reminded me of the LEGO. I think that it is very useful and easy to play because almost all people have this materiel in their houses. However I think that it does not interest all age groups and can be improved by creating a similar application that could help the users create different shapes with it.

The fifth game and final one, AUC gam3etna, was actually my favorite one. It was consisted of a board with the different locations in AUC and cards with objects in these places. The players had to pick a card that had an object to which they had to find solutions to problems related to them. I think that the educational purpose of this game is very important because it creates useful solutions of many problems that face the users everyday by just playing. However, I think that it could be improved by using more durable material and let more people be aware of it.